Yoan Mudry - The Future is Wild

Born in 1990 and based in Geneva, the artist Yoan Mudry is known primarily for large paintings that mount pictures and texts over each other. In this exhibition he showed a single painting, which was installed in the gallery’s showroom. Titled "The future is wild" (2017), it shows a black silhouette of cartoon character SpongeBob SquarePants on deserted railway tracks, over which the word LOOPS is aggressively written in capital letters. This work was accompanied by several pairs of second-hand shoes, customized with an electric device that made them walk mechanically in the space like invisible zombies. They were presented on boxes stamped with various logos transforming the artist’s last name into a design brand. And a book, also titled "Loops", featured a series of essays on time, knowledge and the real. “The future is wild” was the last instalment of a cycle of three exhibitions of the artist’s works in different exhibition spaces in Geneva between January and March this year. Given the temporal and geographic density of the shows, the artist “decided to imagine a series of works that could circulate from an exhibition to the other, that could by recycled, that could transform, and that could change status”, adding: “My idea was to reverse the current imperative of ‘surprise’ and the ‘new’ related to my own status as a young artist.” The show looped back on itself, with the painting in this show appearing as the invitation to the rst installment. Pointedly revealing a carefully deliberated process of visual control, Mudry’s durational staging of his work mirrors the way we navigate an industrialised landscape of regressive reproductions. This show took an ironic attitude towards commerce and accessibility, countering it with a subtle manifesto for the subterranean politics of sharing, friendship and cooperation. 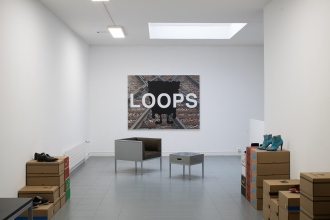 THE FUTURE IS WILD