Step By Step – a cura(ted) work

Yoan Mudry is a painter whose work relies on the orchestration of images appropriated from his visual landscape, re-assembled and confronted within the frame of the canvas. In an era when (re)painting an image can land you in a court trial with outstanding resonances (we could simply mention Luc Tuymans who has recently been found guilty of plagiarism for his painting of a photograph of the politician Jean-Marie Dedecker taken by Katrijn van Giel for Belgian newspaper De Standaard), his use in his 2014 painting entitled “Step by Step” of a work by Richard Prince – taken from Prince’s series « Cowboys et girlfriend » – could hardly be more appropriate(d) : Richard Prince is himself often being sued for copyright infringement. As reported, “Known for appropriating images, Richard Prince’s October exhibition at Gagosian incorporated photographs pulled from Instagram. Photographer Donald Graham has sent cease and desist letters to both the artist and the gallery for unauthorized reproduction of his Instagram photograph”.

In an environment saturated by images of all sorts, to sample and reuse seems to be the only approach one has to make sense of it all. As an echo to Kenneth’s goldsmith’s call for ‘uncreative writing’ – both a manifesto for an art that is no other the reuse of what is already there and an echo to Douglas Huebler’s motto “the world is full of objects, more or less interesting; I do not wish to add any more”, Goldsmith has taught his philosophy of un-creativity at U-Penn in Philadelphia where his “students are penalized for showing any shred of originality and creativity. Instead, they are rewarded for plagiarism, identity theft, repurposing papers, patchwriting, sampling, plundering, and stealing”. As Goldsmiths wrote: “I’ve stolen things that weren’t mine and have made a career out of forgery and dishonesty. I’m proudly fraudulent. And it’s served me well -- I highly recommend it as an artistic strategy. But really, don’t take my word for it.” The British collective Information as Material reminds us that information IS material. And step by step, a layering of reused images create a visual landscape all to common, and yet always unique. 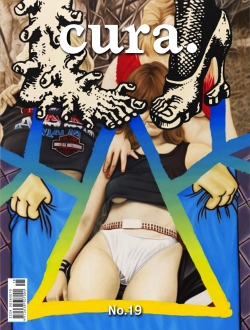